PLATFORM shift+ Meetings facilitate the exploration and creation of audience development models through the use of digital technology.

Regular meetings allow the network to reflect on and develop the ways to access high quality training in digital technologies for theatre artists, staff and young people.

The leading institution in PLATFORM shift+, Pilot Theatre (York, GB), invited the network to Winchester, a beautiful town in the south of England, for the inaugural meeting. Representatives from each of the partnering institutions were given the opportunity to see the touring production of Antigone, directed by Pilot Theatre’s artistic director Marcus Romer.

For three days, artistic and administrative directors from the 11 partner institutions got to know each other. Artistic director of PLATFORM shift+ Dirk Neldner (GER) presented the details of the project and the participants were given a deeper insight into the artistic concept and financial conditions of the large-scale EU co-operation.

The development of the National Production is the focus of the first period of the project. Hosted by the South Bohemian Theatre, artists of different professions and disciplines met in Budweis to inspire each other and to generate a stimulating initial exchange.

Each partner was invited to report about the development of their national production and their experiences with engagement work. Examples of best practice were given: Tabea Hornlein, head of the Theaterakademie at tjg Dresden (DE), gave an insight into their production Erstkontakt (First Contact). With youthful energy, students invited by Veronika Riedlbauchová, professor in Prague and educator of the South Bohemian Theatre, presented their idea of a perfect theatre performance. Director György Vidovszky from Kolibri theatre (HU) introduced us to Cyber Cyrano, an award-winning production made as part of PLATFORM 11+. Video Artist Philippe Domengie (collectif d’ártistes of Marseille, FR) shared his working approach with the European colleagues.

As well as discussing the opportunities and challenges of the upcoming process, the participants began playfully experimenting with digital technologies, especially social media. During the meeting the participants started to communicate through Facebook and Twitter. This was stimulated by a practical exercise, instructed by Mandy Smith from Pilot Theatre under the title of “Social media as a source to inspire narrative“.

The participants of the meeting also got to know more about the South Bohemian Theatre. Director Lukáš Průdek gave a tour through the theatre, which has been operational since 1919 and consists of 3 companies (theatre, dance, opera). On the trip to the baroque town and garden Český Krumlov, the partners visited the revolving stage, a very special part of the Bohemian theatre and the unique baroque theatre.

The partners saw the production The sinful village of DalskabátyorThe forgotten Devil, directed by Petr Hašek, artistic leader of Small Theatre – the department for young audiences, which provided an insight into their work.

The heads of the 11 partner institutions met to exchange their starting points for the National Productions. During the presentations it appeared that the conceptual ideas are very varied and already quite thought out. The conditions and requirements for the 1st Annual Encounter, including the presentation of the concepts of the National Productions, and the Creative Forum were also discussed.

Thomas Bjørnager, artistic director of the hosting Teatret Vårt, invited the participants to its two facilities: Barneteatret Vårt, the department for young audience, located in an historic building in Ålesund and to Plassen, the newly built, highly modern venue in Molde, where Teatret Vårt has been based for 3 years.

At Barneteatret Vårt the partners watched Mannen in pappesken, a production by Andy Manley (GB) for children aged 5+ and family audiences.

The partners were given an idea of the long distances and the isolated little towns that Teatret Vårt has to reach as a regional theatre as they were sailing on a ferry through the fjords from Ålesund to Molde.

The Artistic Directors of the partner institutions met in December 2015 in Berlin for one of their regular updates. The meeting was held in „Podewil”, a cultural centre in the middle of Berlin.

In preparation for the 2nd Annual Encounter in June 2106 the main focus was on sharing the progress that had been made on the National Productions in preparation for their presentations at the My Story Festival in Budapest.  Initially, Dirk Neldner, Artistic Director of PLATFORM shift+, presented the festival concept.  Gyuri Vidovszki, leading director of the host, Kolibri theatre, informed the artists about the technical possibilities of the potential performing spaces.

For the expected 100 participants, this year as well, the meeting will be combined with the CreativeForum  in which current developments and trends in the digital world will be aired in TED-like talks and workshops. There were discussions about which speakers would be suitable and about the day-to-day schedule of the festival.

At the end of that intense meeting there was the performance SPAM from the theatre group Lovefuckers. The two performers delivered an original testimonial to the handling of digital technology on stage thanks to their bold and unconventional grasp of content, an above all, their style of storytelling.

The encounter of the 19 PR-experts, coming from all participating companies, was hosted by theatre Massalia. The meeting place, the old tobacco factory “La Friche”, where the theatre is seated, is a remnant from 2013, when Marseille was the cultural capital of Europe.

The meeting was titled “PLATFORM shift+ in Wonderland – How to make your customers follow the white rabbit”. Frank Tentler, a German social media expert (http://tentler.flavors.me/#english), presented a strategy for online marketing in the digital age. He gave a keynote on the topic of  “communication in theatre 2020” and introduced to location based technology including new models of storytelling as an essential part of an exciting marketing strategy for the future.

Inspired by the keynote, the participants together developed ideas how to perfect the PLATFORM shift+ digital marketing.

The group was also invited to see a rehearsal of the National Production of theatre Massalia & Collectif Le Nomade Village “The girl of the platforms” by Karin Serres.

For two days the Artistic Leaders of all participating companies were guests of the University of Agder, also partner in the project. They met to discuss the first period of PLATFORM shift + and the state of affairs of the project. The participants discussed lively their detailed experiences and expressed their positive sight on the results in their companies. There were intensive talks concerning the second half of the project and future ideas.

The meeting took place during the theatre festival SAND, held by the Norwegian Assitej. Dirk Neldner, Artistic Leader of PLATFORM shift, gave a speech on the project’s concept to the Norwegian festivals participants. The PLATFORM-representatives used the chance to see some performances and to meet Norwegian artists.

In preparation for the final productions/events that will take place in the 2017/18 season, the PLATFORM shift+ Advisory Board met in York, the home of the leading organisation Pilot Theatre. First, the Artistic Directors gave an overview of the progress at their companies and presented the concepts for their Creative Forums, also due to take place in that season.

The 11 local concepts follow the core concept of the three big international PLATFORM shift+ events (Lisbon, Budapest and Tallinn) and implement it on a national level. Different solutions, suitable for each partner, were chosen, but all combining exciting lectures with hands-on-workshops, either for professionals and/or young people.

The second day of the meeting was dedicated to the planning of the final productions/events, which bring together at least three partner institutions together on a common project. The partners used the time for intense debates searching for appropriate concepts, attractive to all involved companies, and possible schedules. This could just be the beginning – many more meetings and talks are needed to develop the productions properly. 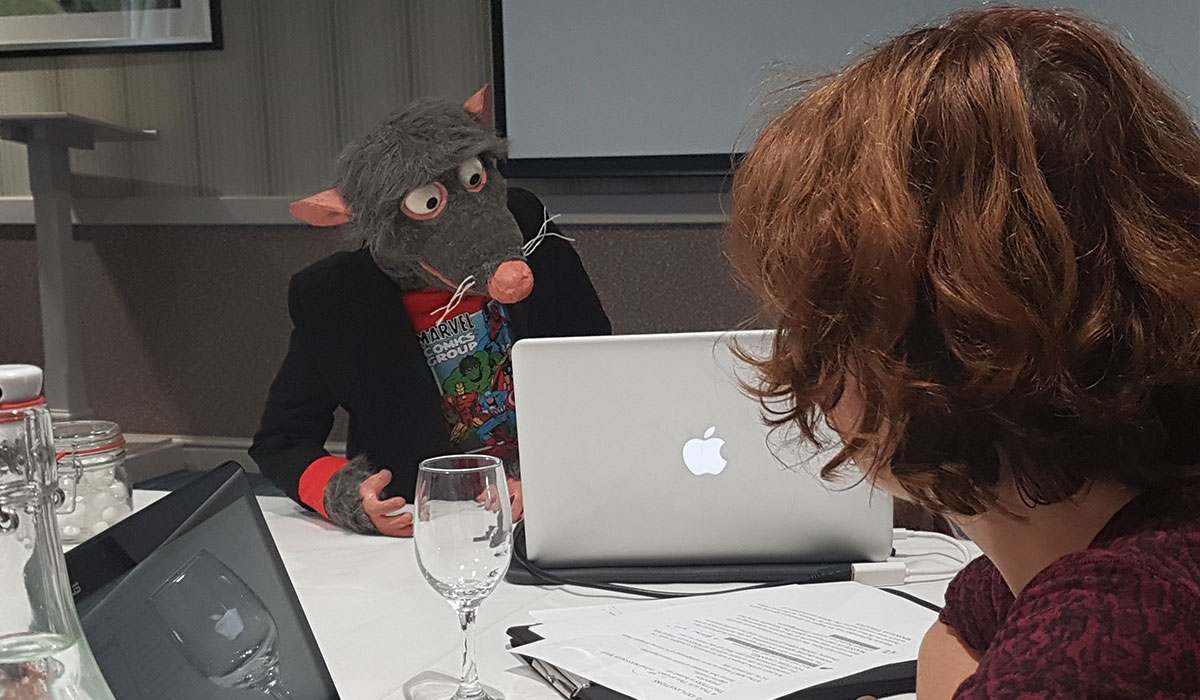 The regular meeting of Artistic and Managing Directors of the companies took place in Greenwich, London, where our partner Emergency Exit Arts is at home. Rothbury Hall, a lovely old building (former church) is the base for their numerous outdoor activities, but also place for creative workshops and other participatory actions. 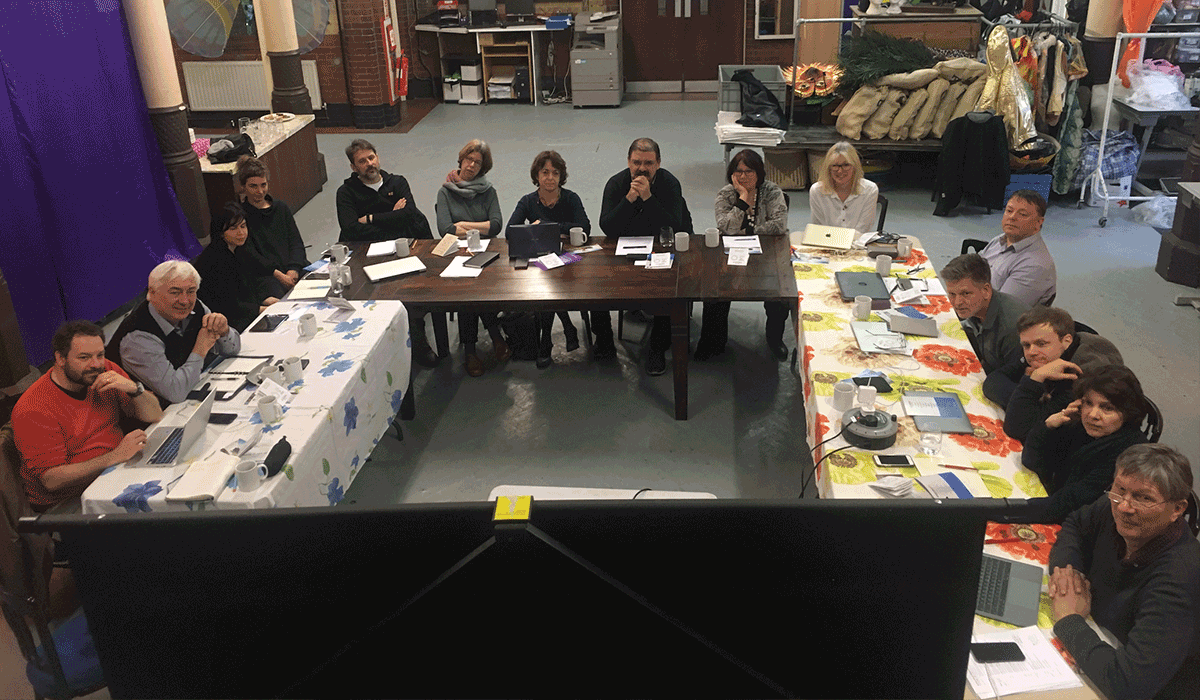 The encounter was used to update each other about the ongoing processes within the PLATFORM shift+ project and within the single companies.

Main topics were the state of affair of the final productions (see details in “co-productions”), the common rehearsal camp for the professionals and the 3rd International Youth Encounter taking place at the same time in Italy in April.

The plans for the local Creative Forums, organised by each company, were presented and the concept for the final PLATFORM shift+ Annual Encounter, bringing together young people from all partner countries with professionals, were discussed.

For one of the evenings Deb Mullins, EEA’s Artistic Director, had arranged a theatre visit: “Revolution” by Exit Production brought together gaming and interactive theatre, involving the audience as the protagonists. For most of the AB-members a quite unusual experience, but definitely worth to participate. 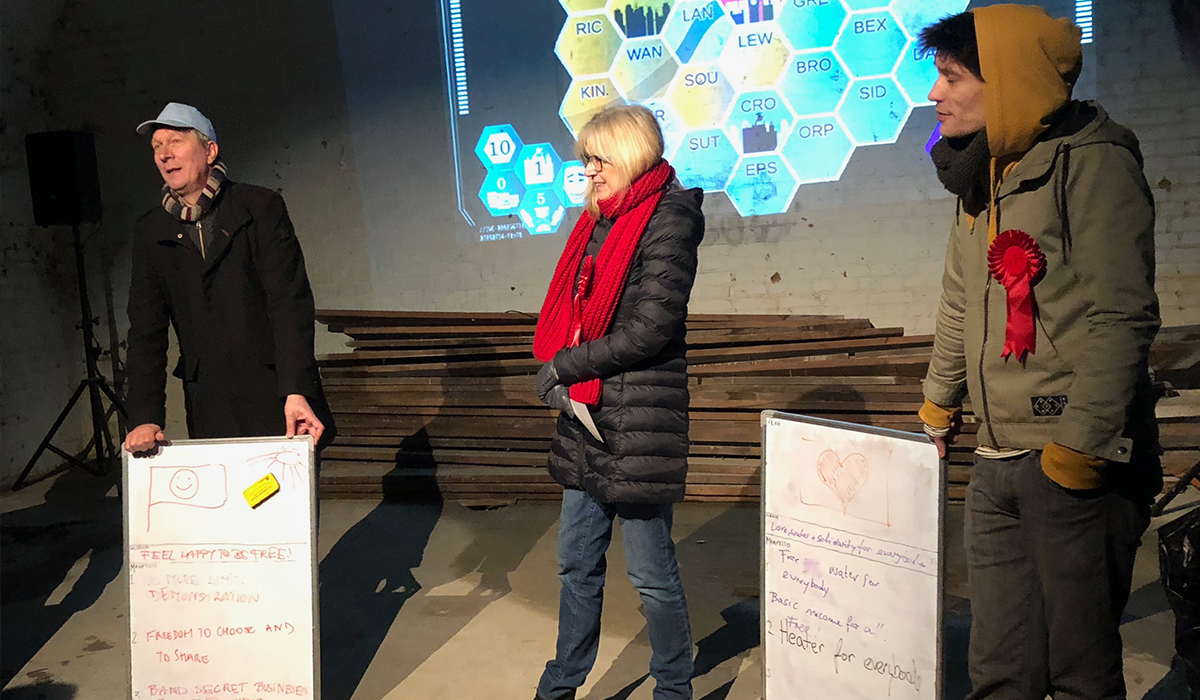 The next scheduled meeting for 2017/18 will take place in: