We’re pleased to present and share with you the first of our quarterly PLATFORM shift+ newsletters. PLATFORM shift+ is a large scale cooperative project, announced by the European Commission under their European Culture Funding Stream Creative Europe. The artistic network is created to meet the new challenges of producing theatre for young people in the digital age.

In each of the newsletters you will find information about activities such as workshops, annual encounters, youth encounters, and much more. Alongside this, each newsletter will allow you get to know two of our partners a bit more.

With information direct from the partners, they will guide you through the venues and introduce you to the artists involved in their companies. You will get an insight into processes of their productions and you will find out something interesting and unique about each of the companies.
The Aim:

11 partners in 9 European countries are facing the question of how theatre can react to and work with the new opportunities and challenges of the digital age, keeping theatre vivid and relevant for a young audience.
PLATFORM shift+ is a networking platform for creative exchanges and cooperative productions to develop practice and learning across European work.
These newsletters will reflect this and keep you up-to-date with the working processes and the relations between the companies.
Welcome to PLATFORM shift+!

With three meetings PLATFORM shift+ has already taken off and is progressing.The participants of the 11 partner theatres got to know each other and the details of the project. The development of the National Production is the focus of the first period of the project.Inaugural Meeting in Winchester (UK) in November 2014.

Our first meeting was in the UK in November 2014. The leading institution, Pilot Theatre, based in York, invited the network to Winchester for the inaugural gathering of the partners. 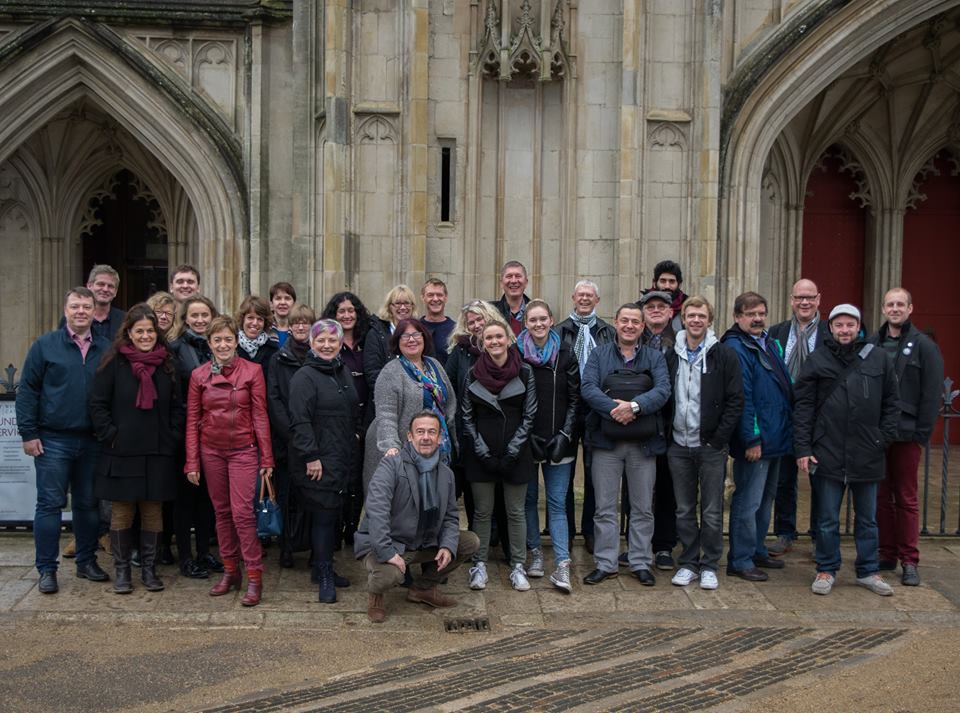 For three days, artistic and administrative directors from all companies met to get a deeper insight into the project details concerning the artistic concept and financial conditions.

And we had the chance to see Pilot’s recent show Antigone.

Marcus Romer, artistic director of Pilot Theatre, had invited Bill Thomson, technology journalist and broadcaster, to give a speech concerning our digital future and theatre’s role in it.

You can read an article based on the talk that Bill gave to the partners at the inaugural PLATFORM shift+ meeting in Winchester, UK, by clicking here.

The aim of this meeting was to inspire each other with different inputs and discussions for the national production, and to generate a stimulating initial exchange.The pretty old town of Budweis greeted us with a fresh and wintery scene. Lukas, Peter, Veronica and Janek, our project partners of the South Bohemian theatre in Budweis, warmly welcomed us with a tasty and substantial Czech meal. 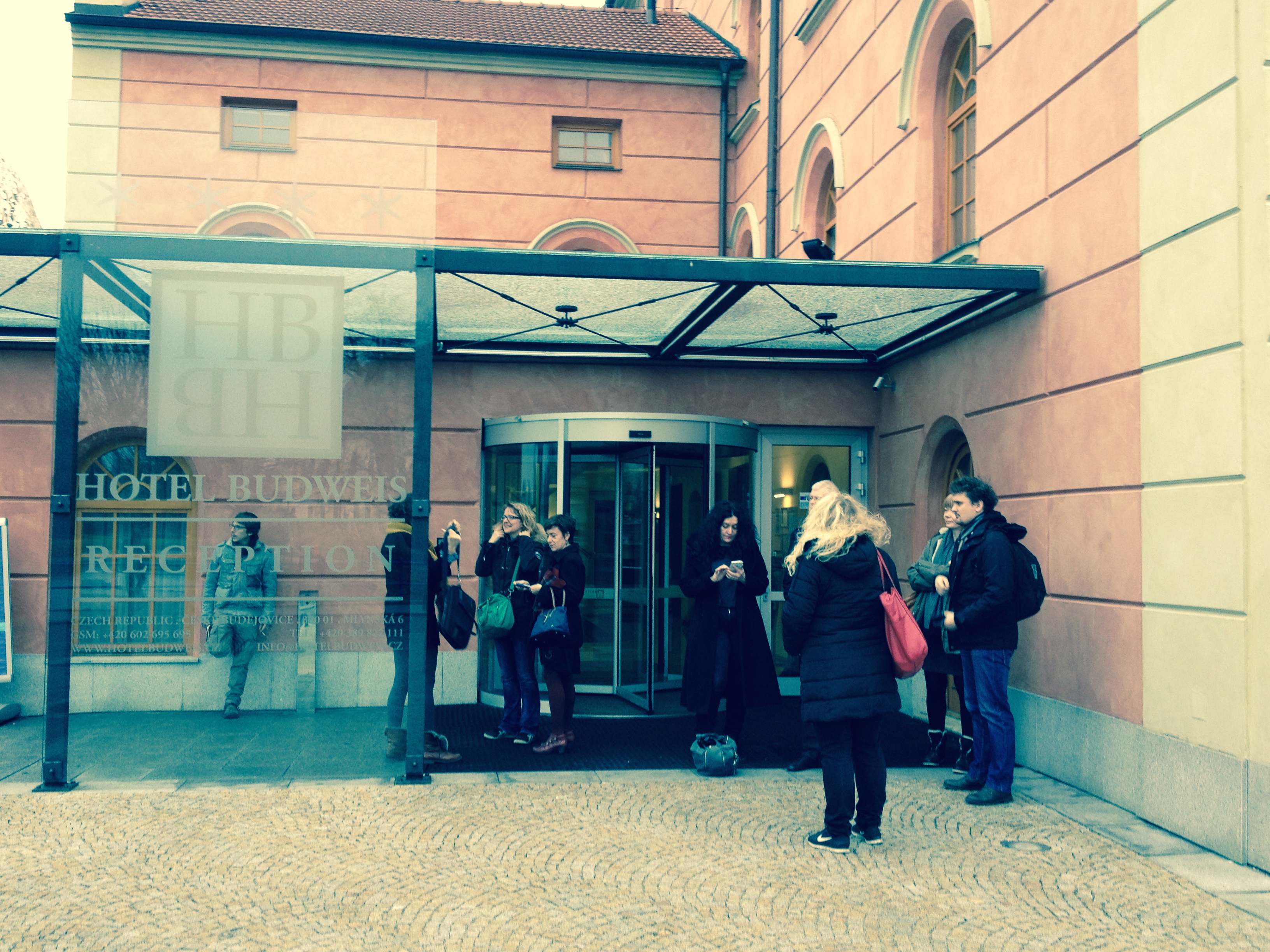 The representatives from each of the partnering theatres steadily arrived. The artistic teams were composed of writers, directors, video artists and actors. A sociable and enjoyable two-day programme was waiting for us, which we began after a first night spent in the highly modern Budweis Hotel. The meeting began in a café, which was prepared for us as a conference room.The first day aimed to examine the key questions: 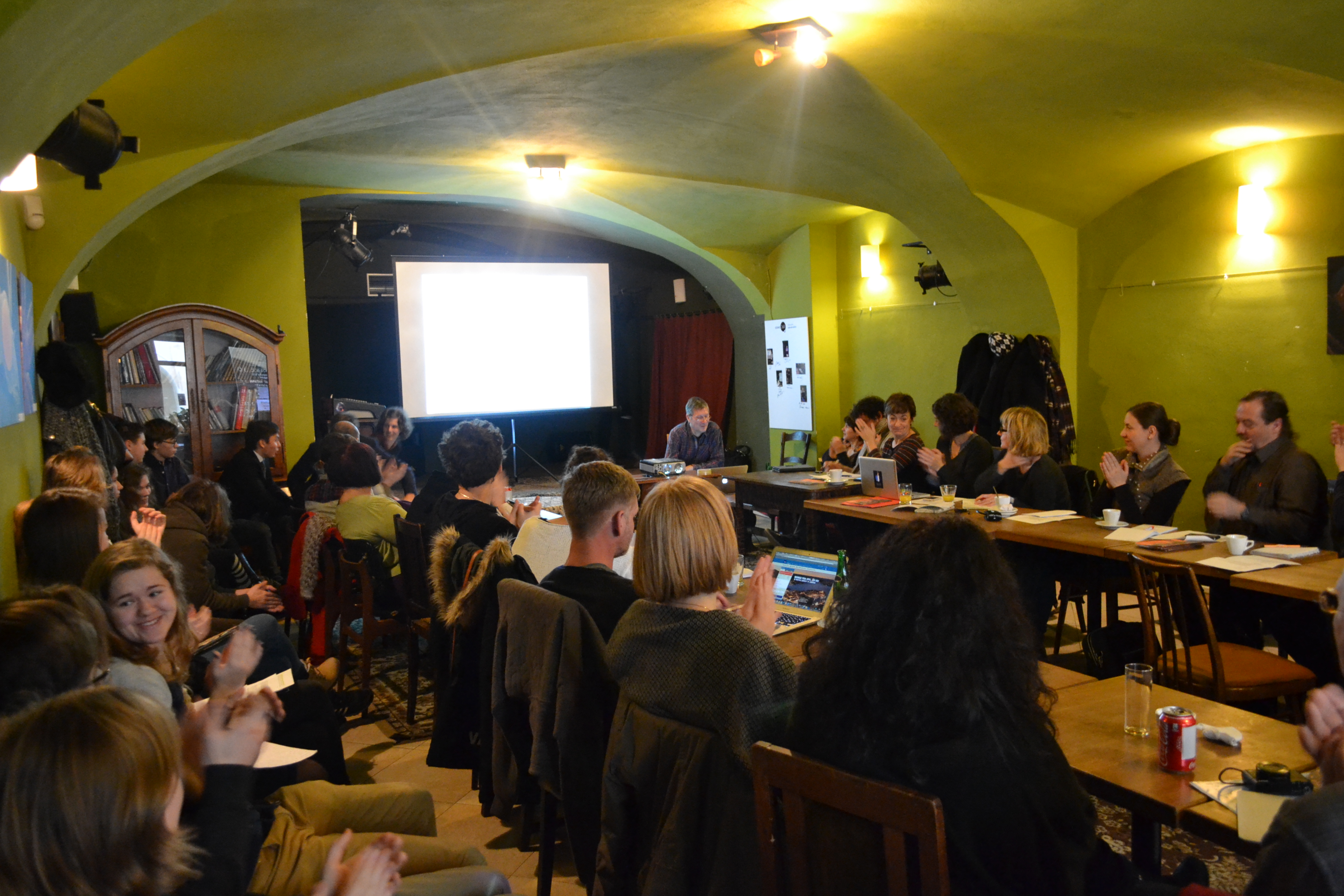 Students invited by Veronika Riedlbauchová, Professor in Prague and educator of the South Bohemian Theatre enthusiastically and confidently presented their idea of a perfect theatre performance. You can access their presentations by clicking this link. 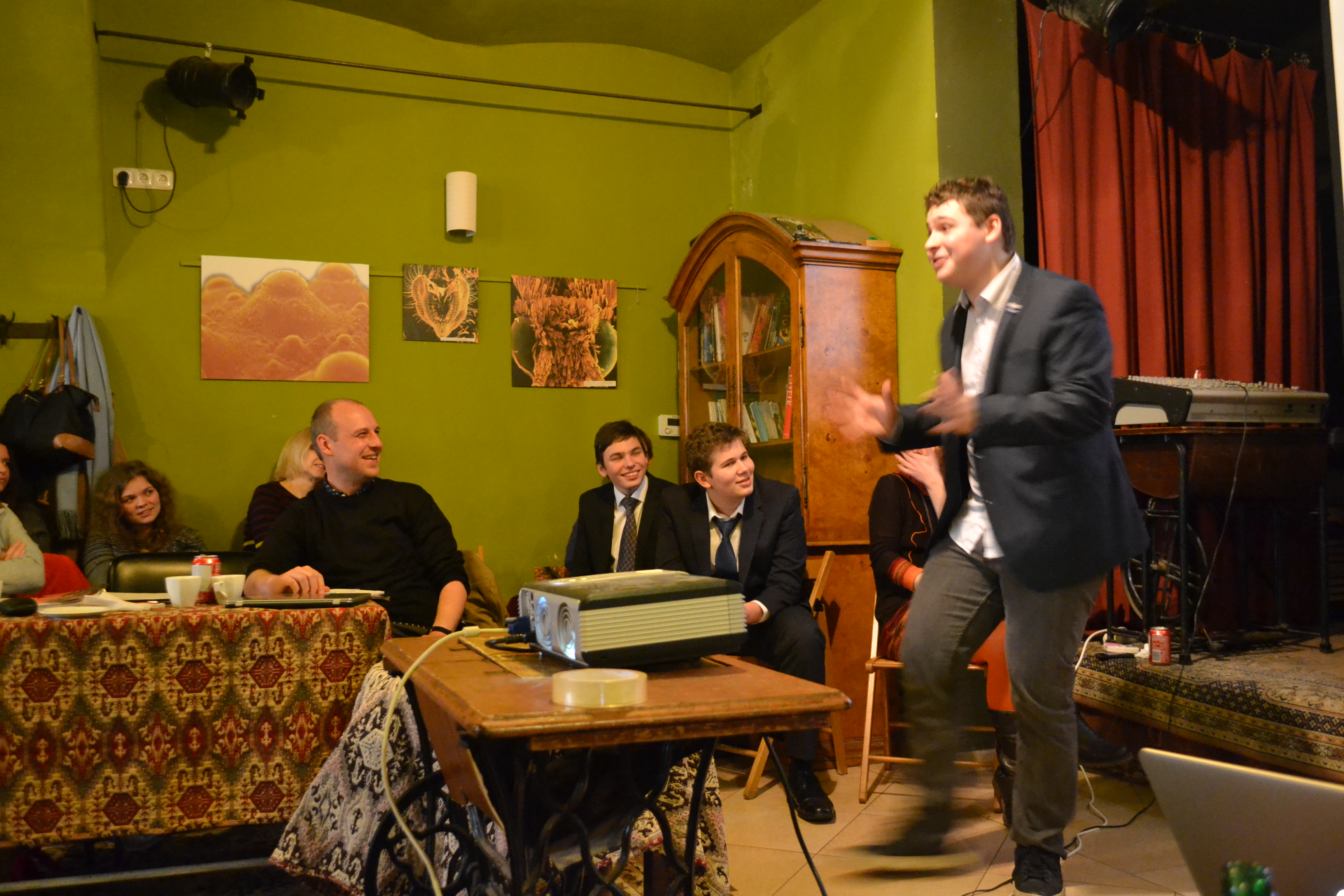 We had many motivating discussions. Also, each partner theatre was invited to report about the progress of their national production and their experiences with engagement work.

Some best practice examples where given: Tabea Hornlein, head of the Theaterakademie at tjg in Dresden (DE), presented their production Erstkontakt (First Contact) which opened successfully on March 7 as the first PLATFORM shift+ production.

In the evening we had the opportunity to see a production by the South Bohemien theatre / Small theatre. We enjoyed The sinful village of Dalskabáty, or The forgotten Devil directed by Petr Hašek, a dynamic show, full of music and movement, using elements of commedia dell’arte.

On the second day, Lukas Prudek, the director of the South Bohemian theatre, who had just taken up his office, welcomed us. 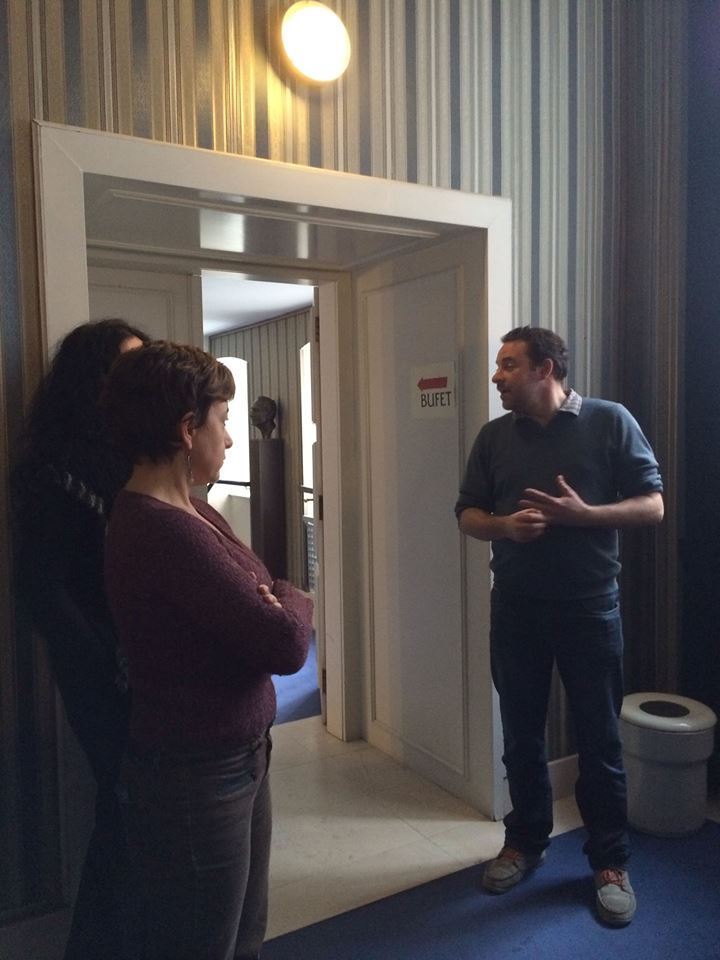 Proudly and with sensitive care, he gave us a tour of the theatre which has been based in Budweis since 1919. Currently construction work is taking place on the development of a bright modern building extension.

The discussions that took place on the second day focused on the question: How can digital and social media be integrated in theatre productions as a artistic and aesthetic solution?

Also, Philippe Domenigie (collectif dártistes of Marseille/ Theater Massalia / FR) shared his works.We discussed the opportunities and challenges of the upcoming process, before the participants began to experiment with with digital technologies, especially social media. During the meeting the participants started to network and communicate through Facebook and Twitter.This behaviour was stimulated by a practical exercise, which was led by Mandy Smith, Pilot Theatre, under the title ‘Social media as a source to inspire narrative‘. Diego de la Vega on Facebook exhibited some of the learning in the photo series “the fascinations of the blue light” uploaded on Facebook. 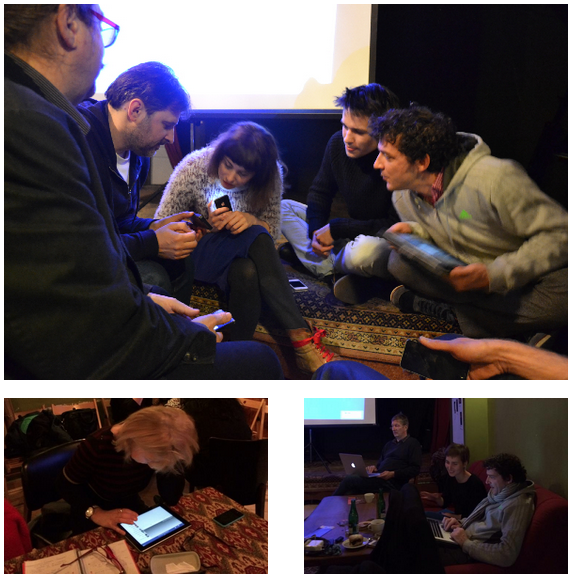 In the late afternoon the project participants climbed onto a coach and set off on a trip towards a regional highlight, the baroque town Český Krumlov. Lukas Prudek gave us a historical introduction and later showed us the impressive revolving stage, which is part of the Bohemian Theater. 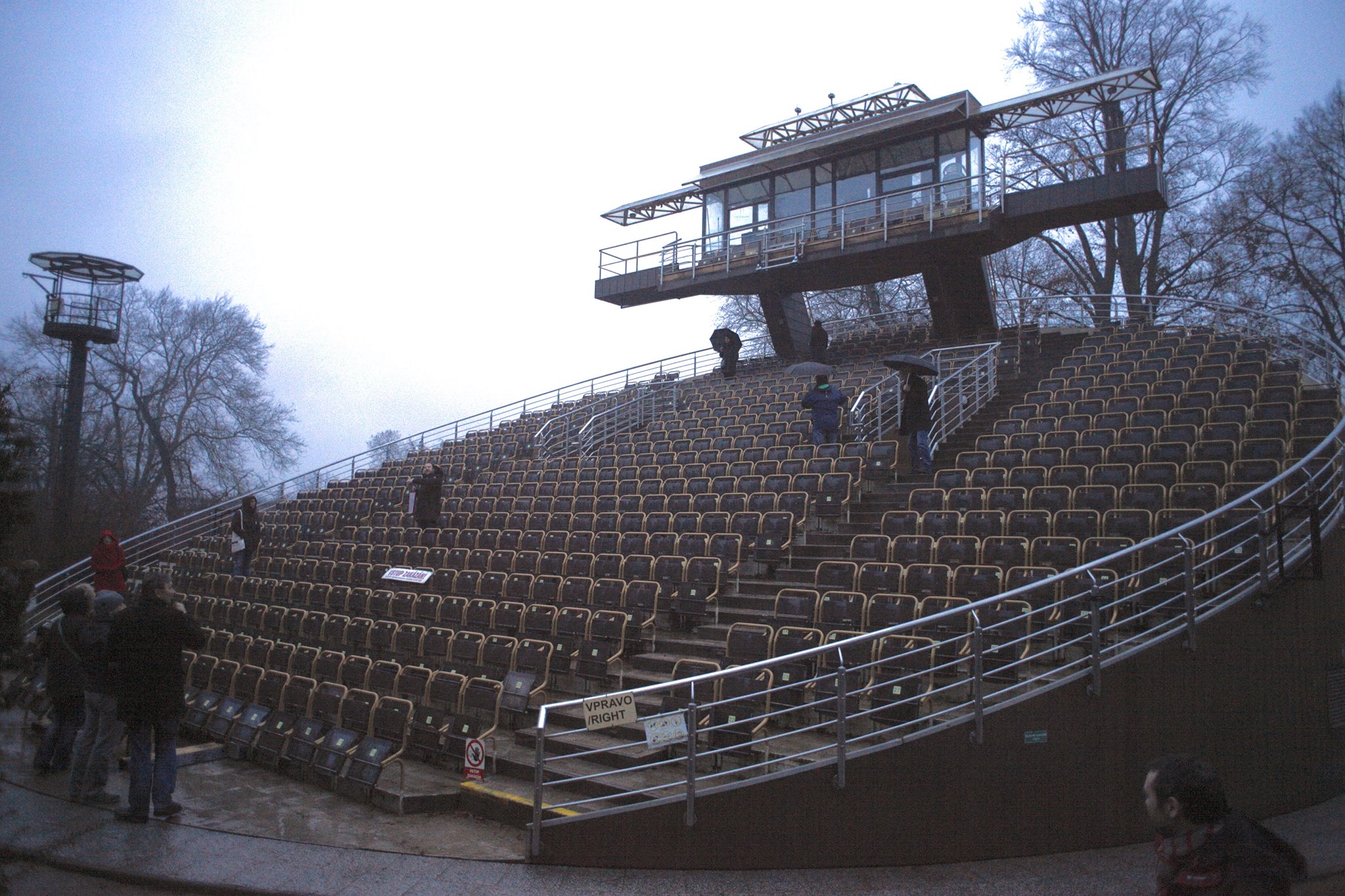 We then had the opportunity to see the marvelous baroque theatre. 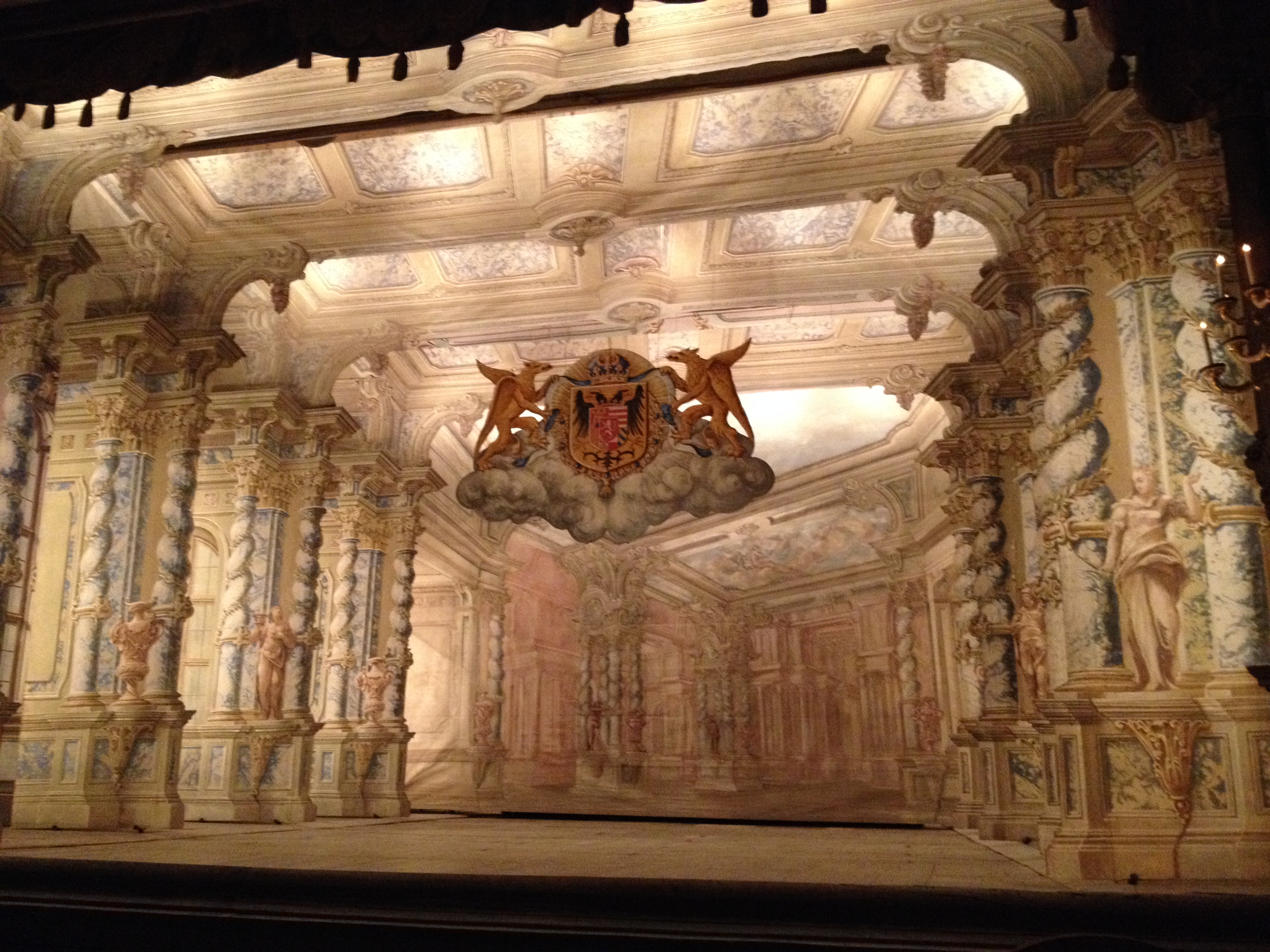 A sudden snowfall entertained us as we watched from the windows of the baroque theatre, making the magical atmosphere of the little town complete. We then moved on happily to a traditional Czech pub for a final dinner. 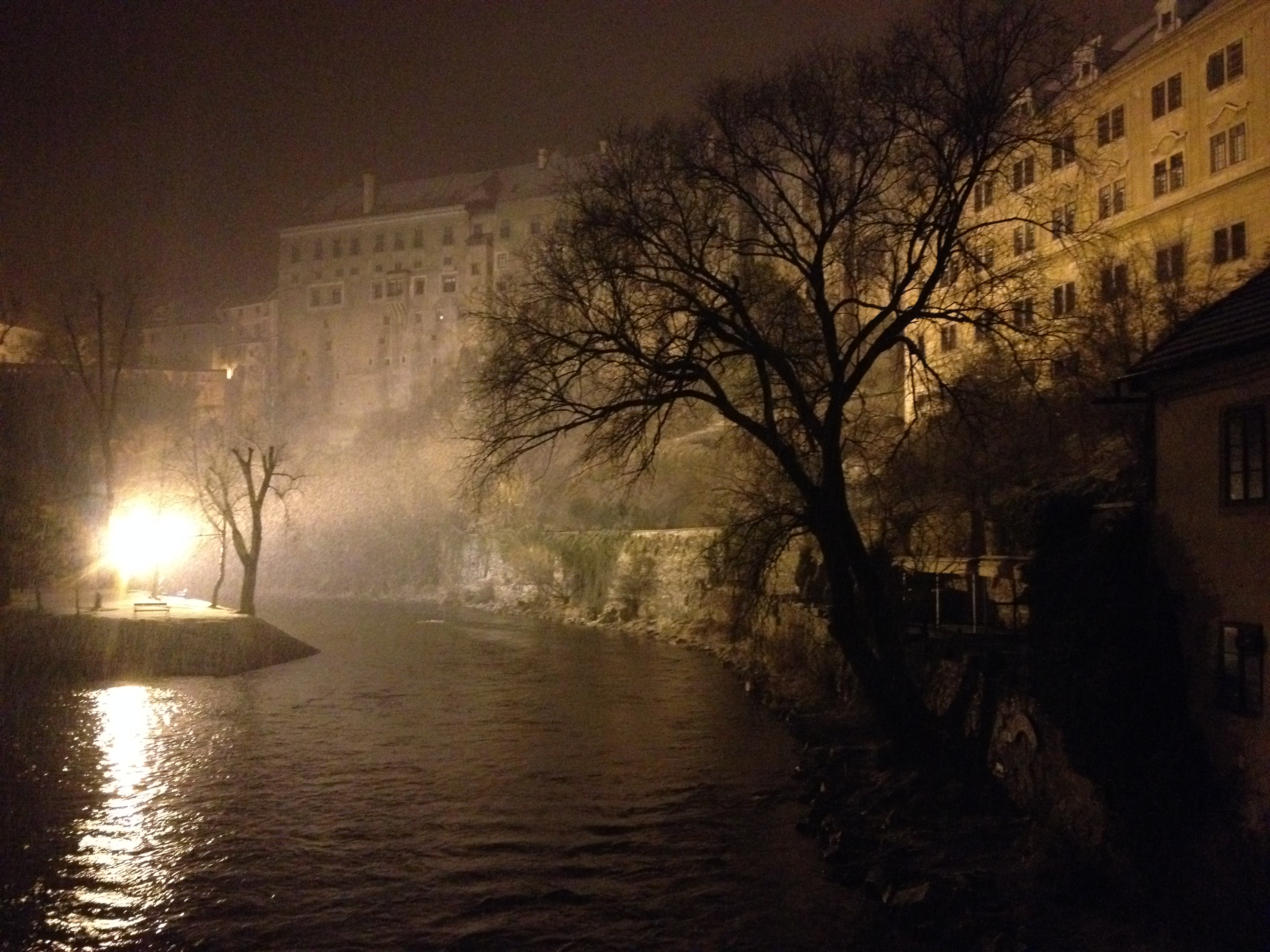 The Advisory Board Meeting in Molde, Norway

The next meeting took place in Molde and Ålesund at the beginning of April 2015. The heads of the 11 theatres met to exchange their initial concepts for the national productions. We also prepared and discussed all the conditions and requirements for the Annual Encounter and the Creative Forum in Palmela, Portugal, this summer.

The artistic director Thomas Bjørnager showed us two facilities and explained how they are connected: Barneteatret Vårt in Ålesund, a theatre for a young audiences and Teatret Vårt in Molde, a newly built, highly modern structure. He wanted the partners to experience how it feels to be a regional touring company in Norway.

We got the chance to see a production made by the Barneteatret Vårt in Ålesund entitled Mannen in pappesken. This is a production by Andy Manley (GB) for children aged 5 and older. It is about a man who lives in a house, which is a box that has many boxes within it, who learns to overcome his fears.
Sailing on a ferry through the fjords for three hours from Ålesund to Molde watching the nature that on some parts even seems to be untouched gave us a sense of the long distances and the isolated little towns that Teatret Vårt has to reach. 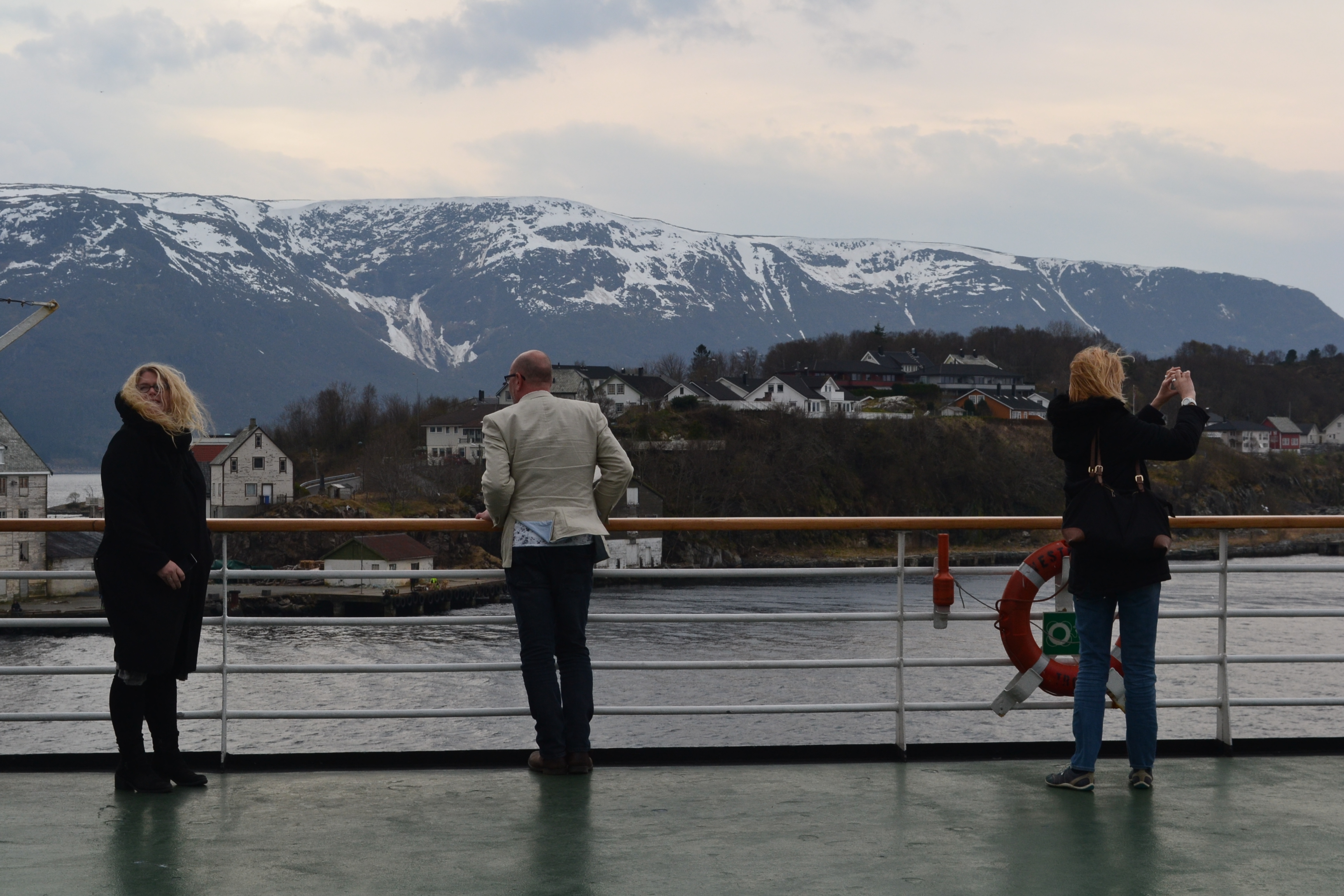 During the presentations that informed us about the concepts for the national productions it soon appeared that the ideas owere very varied and already quite well thought out.They will be presented in Pamela at the Annual Encounter in a large pigsty, which was developed into a venue by O Bando theatre.
PLATFORM shift+ activities
With three meetings PLATFORM shift+ has already taken off and is progressing.
The participants of the 11 partner theatres got to know each other and the details of the project. The development of the National Production is the focus of the first period of the project.

They are a multi-platform organisation, working with diverse teams to make a wide range of work for a range of audiences. Based in York since 2002, they are one of the few national touring mid-scale companies to be based outside London.

This video presents Pilot Theatre and gives an overview of their work from 2012 to now, including comments from the Artistic Director, Associate Director, and writer Roy Williams:

ANTIGONE by Roy Williams is Pilot’s reference production for the PLATFORM shift+ project. Antigone is a modern interpretation of Sophocles’ classic tragedy. You can get an impression of it in the following interview that Roy Williams, writer, and Sean Sagan, actor, gave on Arise News:

In the following video you can get an impression of the audience response to Antigone, including younger audience members:

The South Bohemian Theatre is a professional four-ensemble theatre that has been based in České Budějovice since 1919.

In this Video Lukas Prudek, the director of the South Bohemian Theatre, will guide you trough his theatre (Subtitles can be switched on in the You Tube menu bar):

And here you can follow Petr Hašek, the artistic director of the Small Theater in Budweis, through his venue:

The FILMMAKERS, a production by the Small Theater, is designed for audiences aged 13+. It gives them a tour through the world of film and film technologies. A tiny, but perfectly equipped, film studio is created on stage to show spectators anything that a big movie screen can do. Is it possible to create a high-budget film without cameras and post-production technologies?
The Filmmakers was created as a collective improvisation without a script and based on a concept and idea. Each member of the actors’ team is a co-author of the whole production.
You see a short, single story on stage. But you will see it six times as it transforms in film history. Starting with silent movies over to Alfred Hitchcock’s horrors, western movies in sepia, misery of war, sitcom couch, and all the way to space sci-fi.In heir film-theatre lab you look under the hood of where all big movies in the world were created. One musician operates the sound design of the whole film history of the world, five actors perform in dozens of roles, 40 costumes with more than a hundred sets and props are used in front of a 2 meters film screen, and its all completely in 3D. since theatre already operates in 3D!
Cast: Denisa Posekaná, Lucie Škodová, Bartoloměj Veselý, Jan Hönig, Jan Vejražka, Petr Hubík / Music: Petr Hubík and Jan Čtvrtník / Script: Janek Lesák and company / Set and costume design: Kamil Bělohlávek / Animations: Tomsa Legierski / Dramaturgy: Petr Hašek / Directed by: Janek Lesák 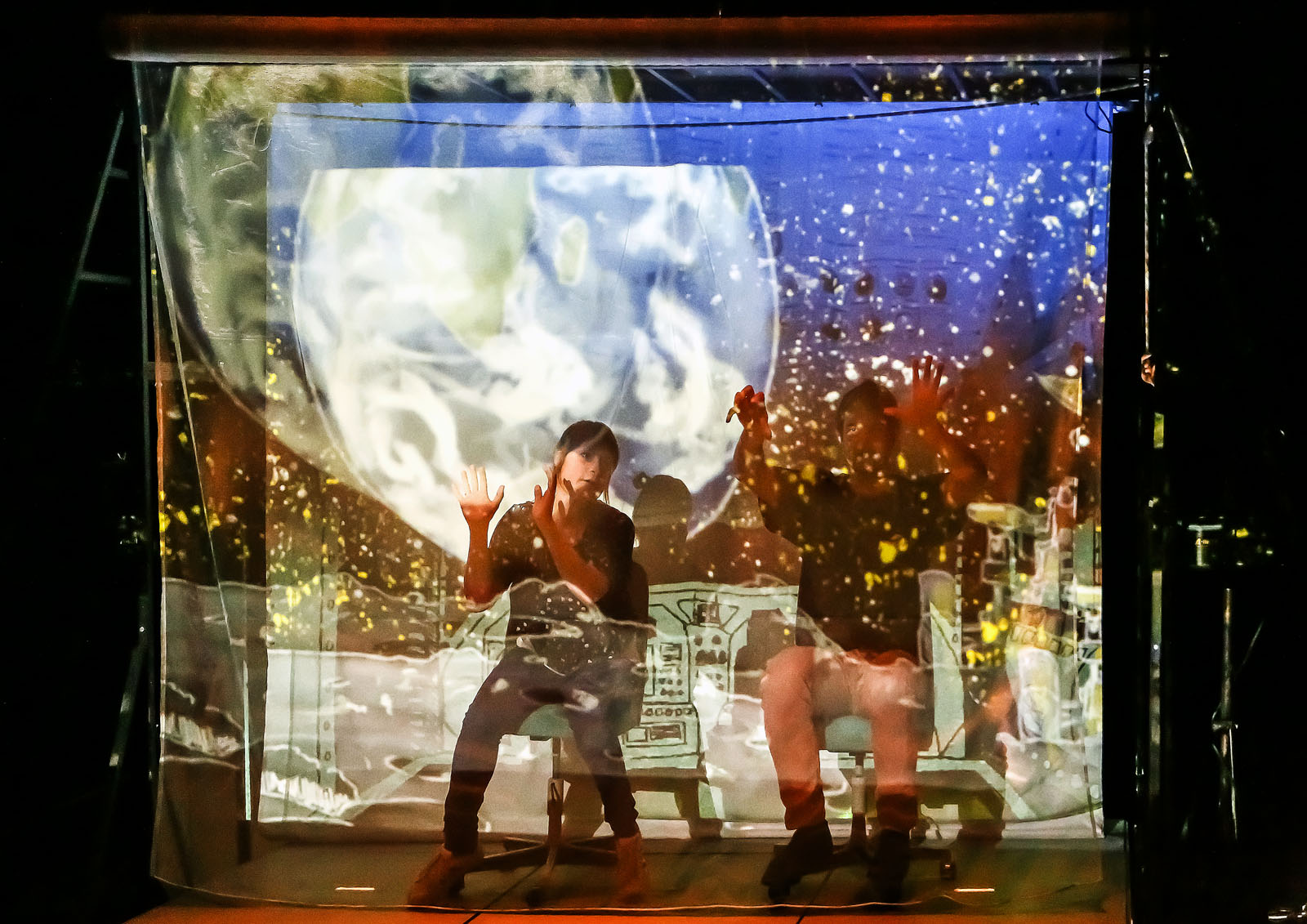 JAN VEJRAŽKA – an actor Jan is the protagonist of all six short stories that make up The Filmmakers. He graduated from the Department of Alternative and Puppet Theatre at the Academy of Performing Arts in Prague (KALD DAMU). He has been working at Small Theatre in České Budějovice since 2011. He is a theatre sportsman, playing soccer.Along with the actor and musician Jiří Konvalinka he forms the music emo-noise-rap-hop duo called Mutanti Hledaj Východisko (Mutants searching for a way out).
CRITICAL RESPONSES BY A YOUNG PERSON“The Filmmakers was something different than a classic show. I liked how they turned a simple car ride into an experience. They manually performed windshield wipers, then rain and even windshield washers.”“Everything was very elaborated and actors were well coordinated. It was funny and every once in a while I was even touched.”

“The coolest thing was probably to watch how the movie sound is being made. I enjoyed it and laughed a lot and wasn’t bored once.”

“I liked The Filmmakers. The show captured our attention which sometimes is very difficult to achieve. I recommend Small Theatre for either a date or when meeting friends. It’s worth it.”

DID YOU KNOW THAT THE WORD “ROBOT” WAS INVENTED IN CZECH REPUBLIC? 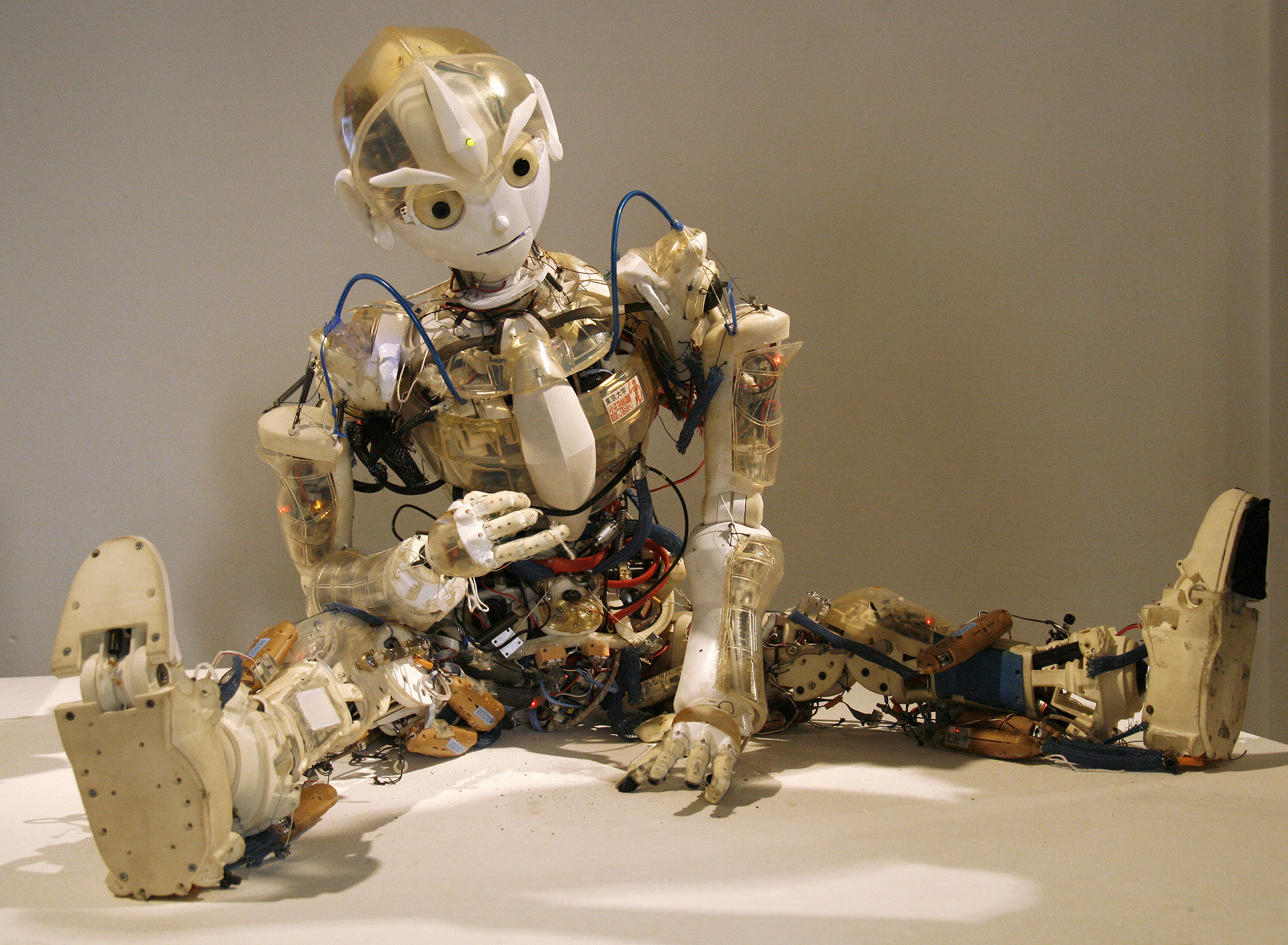